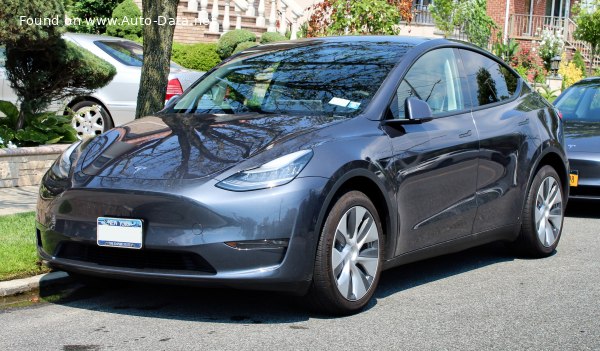 All TESLA MODEL Y VIN Decoder and Lookup reports provide a complete overview of vehicle current condition and past including the following data:

Tesla, Inc. ( TESS-lə or TEZ-lə) is an American automotive and clean energy company based in Austin, Texas. Tesla designs and manufactures electric vehicles (electric cars and trucks), battery energy storage from home to grid-scale, solar panels and solar roof tiles, and related products and services. Tesla is one of the world's most valuable companies and remains the world's most valuable automaker with a market capitalization of more than US$600 billion. The company had the most worldwide sales of battery electric vehicles and plug-in electric vehicles, capturing 23% of the battery-electric (purely electric) market and 16% of the plug-in market (which includes plug-in hybrids) in 2020. Through its subsidiary Tesla Energy, the company develops and is a major installer of photovoltaic systems in the United States. Tesla Energy is also one of the largest global suppliers of battery energy storage systems, with 3.99 gigawatt-hours (GWh) installed in 2021.

Tesla was incorporated in July 2003 by Martin Eberhard and Marc Tarpenning as Tesla Motors. The company's name is a tribute to inventor and electrical engineer Nikola Tesla. In February 2004, via a $6.5 million investment, Elon Musk became the largest shareholder of the company. He has served as CEO since 2008. According to Musk, the purpose of Tesla is to help expedite the move to sustainable transport and energy, obtained through electric vehicles and solar power. Tesla began production of its first car model, the Roadster sports car, in 2009. This was followed by the Model S sedan in 2012, the Model X SUV in 2015, the Model 3 sedan in 2017, and the Model Y crossover in 2020. The Model 3 is the all-time best-selling plug-in electric car worldwide, and, in June 2021, became the first electric car to sell 1 million units globally. Tesla's global sales were 936,222 cars in 2021, a 87% increase over the previous year, and cumulative sales totaled 2.3 million cars at the end of 2021. In October 2021, Tesla's market capitalization reached $1 trillion, the sixth company to do so in U.S. history.

Tesla has been the subject of many lawsuits and controversies arising from statements and acts of CEO Elon Musk and from allegations of creative accounting, whistleblower retaliation, worker rights violations, and unresolved and dangerous technical problems with their products. In September 2021, the National Highway Traffic Safety Administration (NHTSA) ordered Tesla to submit data pertaining to all sold US vehicles equipped with Autopilot following the agency's investigations into traffic deaths involving the use of Autopilot.